The Hills are alive

with the sound of my heart beating out of my chest...HA!
Dad and I did hill repeats this morning and I really started to realize why he recommended me look at hills as a friend and not an enemy to be conquered.  I think by the time I felt like I reasonably conquered going up and down hills, I probably would have given up.  Keeping the mindset of a hill being a friend (albeit a friend that wears me out) definitely kept today from being as much of a mental exercise as it could have been.  NOW don't get me wrong, I had to reign in my mind a few times, but it really wasn't all that bad.  Dad and I did an hour run with the hill repeats sandwiched in the middle.  HA and at the end of the run I saw a tiny little hill and imagined myself collapsing with exhaustion.  Somehow, that thought made me giggle like crazy at myself...I must have been really tired to have gotten so amused at the thought of me dramatically collapsing to the ground.
The good news is that my heart rate hit its red zone as we were increasing our speed at the very top of the hill (just as it started to flatten), which was much better than it getting in the red halfway up.  By the time we got to the bottom, my heart rate was back to normal (normal meaning its target rate while I am doing an easy run).  In all honesty, I was completely shocked by my heart's ability to recover so quickly.    Maybe I shouldn't that impressed, but I was :-)
OKAY so now to more interesting things...
Layla is starting to talk like crazy!  Well..let me back up...we think she's speaking Chinese because we can't understand a word she's saying, but she's definitely trying to talk in sentences.  She will talk and talk and talk and then look at Neil or me and nod her head.  I've started nodding in agreement which normally works unless she's trying to ask me for something.  And her independence is starting to take off like crazy.  She is now an accomplished playground climber and slider and no longer wants mommy's suggestions (ie-hold on to the rail, sit down...yada yada yada).  So I've learned to walk a very fine line between letting her figure out things on her own and protecting her from falling.  So I've learned it on the playground...the first of many areas where I'll have to walk that line..YIKES okay so that's kind of a scary thought. 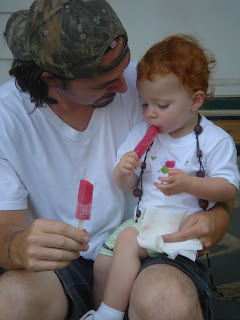 And with that thought...here's Layla and daddy enjoying Popsicles..the perfect treat for her sore throat and a hot day.
Posted by Lindsey Broere at 9:39 AM

Congrats on your successful run and on raising an independent lady! I love the pic...love her necklace, but not near as much as the bloomers on her head!

Can't wait to hear her talk...

Popsicles...YUMMY!! :) Successful hill climbing...SUPERB!!! Great way to round out the week. Enjoy your rest day. :)

I tagged you for a meme to share six random things about yourself! :)