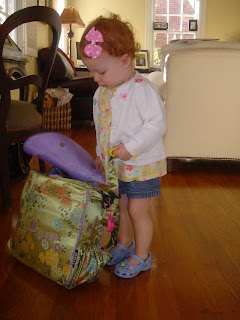 Layla had her 18 month appointment today :-( which meant more shots..YUCK!  On the positive side...we are almost done!  The appointment came at a perfect time.  She developed blisters on the inside of her mouth several days ago...blisters that were accompanied by a fever..ick!  She must have had them all down her throat as well, because she has barely eaten in days.  AND yesterday she had  blotchy spots on her back and belly AND a short dizzy spell after playing outside.  I was up tossing and turning ALL night--worried sick about what was going on.  I researched her symptoms online and deduced that it was probably fever sores...but I needed a REAL doctor's opinion before I could be a little less worried.
I held my breath and prayed like crazy as the doctor looked in her mouth..at her little blotchy spots...and then told me that there was nothing to worry about except that she had more than likely contracted the virus that causes fever sores.  Apparently, the first bout with fever sores is the WORST and she'll never have them that bad again.  The dizziness was from exhaustion (she had been awake since 5am...only napped for 2 hours and barely ate for three days).  Poor Layla.  I guess I learned that despite my best efforts, she'd eventually get those nasty fever sores--I think Neil's whole family gets them and my dad and I do as well.  Poor poor poor Layla...I wish I could just reach in and take that little virus away from her!  But I am thankful--very very thankful--that it is fever sores and not something more serious.
BUT other than that, Ms Layla is right on track..she's in the 70th percentile for height and 30th for weight.  The doctor said she is likely going to be long and lean...just like her mommy--HA--100% KIDDING.  And Layla showed off some of her new words with the doctor, thankfully.  I was so afraid she'd clam up and not say a word.  I tried desperately to teach her how to recite the 13 original colonies on the way to the doctors office, but failed :-)  Kidding again.  I would have been so proud of her if she would have just grunted and pointed the whole time because she really controlled herself from slipping into a tantrum and from yelling--and that's really all I hoped for.
AND over to the topic of running....
I finally broke down and got my new running shoes.  I absolutely loathe spending money on myself until I absolutely have to...and my feet were telling me that I HAD to have new shoes.  I was a few weeks past the 400 mile mark and knew it.  So I went to roadrunner.com and ordered my new Nike Skylons...I made a switch from the previous shoe because it felt a little too heavy to be dragging around for 26.2 miles and up hills.  I LOVE them!  They are super responsive and fit like a glove--and they weigh only 8oz .  I'll be interested to see how they do when I start speed work in the next few weeks (YAY-I only have three more weeks of hard hills left until I "graduate") and how they hold up after 200 miles.
Last night I had my first time run with Amy, my neighbor--who is more competitive than me--if you can believe it!  Needless to say, she was afraid I'd think she was slow as I let her set the pace (she hadn't run more than 3.5 miles in two or three years)...so she set a somewhat fast pace for 5.5 miles.  I honestly thought she'd wear herself out by 3 miles, but oh no!  At our 4th mile I got a call from my hubby that Layla was awake and sort of whining...so we literally sprinted the last mile so that I could get home quickly.  We finished 5.5 miles running roughly 8 minute miles--a little less.  SO I am planning to take Tuesday off in order to rest up for Wednesday's hills.  I'm actually not supposed to be doing any faster stuff until I get the all clear from dad...so I better rest up for Wednesday--otherwise, I'll get the same talk about doing too much too fast :-)  And I'll disappoint dad for not listening (even though the pace for this particular run was not my doing)...and that's the worst!
Dad and I have scaled back our long runs the past two weeks to 14.5 and 16.5.  We'll pick up mileage again this week as we work our way to 26.2 in 3hr 39 minutes.  We're almost there guys!  Neil and I drove to Charlotte on Saturday to spend some time together for our anniversary and I was able to see some of the route I'll be running in December.  I got so excited and nervous!  It feels so great to be competing in something again.  I've missed that side of me.
Posted by Lindsey Broere at 11:25 AM

Oh no...poor Layla!! :) I am glad that her sores were nothing too serious.

About your running...I can't believe that you are almost to the point of reaching your 26.2 mile goal. I can't wait to see you accomplish what you have been working so hard for. I will be in Charlotte in December to cheer for you as you cross the finish line...I can't wait!!!

Oh yeah...let me know how those shoes work out. I'm always interested in learning about a good pair of running shoes...I need all the help that I can get.

Okay, I posted about you and your running before I read the bottom half of this post. Now, I realize your running in December, but what for? You must go read my blog now and give me pointers. I'm not kidding.

I'm doing the December Charlotte Marathon because its a Boston Marathon qualifer :-) I'm nervous...I'm excited...I have a lot of work to do

I'm not doing any races until then because I'm preparing SPECIFICALLY for that marathon and I don't want to muddy my focus...

AGAIN...Jessica...I am SO SO SO excited for you!

ooo that sounds like hand-foot-mouth disease! Rachel and I had that a couple months ago...miserable.