When the Moon Hits Your Eye....

Ahhh...just got in from a five mile run...I had wanted to get something quick in before the rain came (still not here, PS).  My Ipod was dead...Layla carried it around in her "purse" for most of the day and it was left on...boo!  I really find it hard to run without my ipod or a partner--I get bored pretty easy.
ANYWAY--here is a snapshot of how my brain works...tick. tick. tick. tick.  all day.  I started my run just kind of thinking about my upcoming beach trip with the whole Slate family--which made me very excited.  Then I passed by a house on 2nd Street where an older couple was sitting on a deep front porch--the kind of front porch you see on a house built in the 1920s or early 30s.  And I thought---awwhh how sweet, they are STILL holding hands (cue theme song from Lady and the Tramp--I don't know--I was daydreaming).
Then, I ran by another house with an adorable little window box.  It made me think of the city where Neil and I spend part of our honeymoon, Fere.  It was a small, cute as a button town in the Champagne region of France.  We stayed in an old castle with an AMAZING pool.  I began to think about laying out by the pool sipping champagne and how the biggest thing on my mind was whether or not my tan was even and if the pool was too cold to jump into (it was the morning after a late August rain--which made the pool quite frigid).  Then I immediately thought of our time in the Latin Quarter back in France and this small little underground bar where we smoked cigars and drank cheap French wine.  SO I had to put a picture up :-) This one isn't at that particular cigar bar...but it was at a little bistro just before we stumbled upon the best kept secret in Paris! 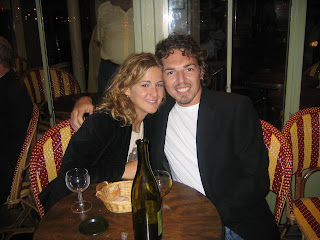 Finally--I ran past a car parked in a strange parking lot.  It was already 8:30 at night and most of the parking lots downtown were clear.   It was really strange to see a Mercedes S class parked in such a strange lot.  I thought....awwwhh man, I bet that car belongs to a man who was picked up after work by his wife and they are probably on their way to Charlotte or something for a date night.  They'll probably stay in a quaint little hotel and have a great dinner tonight.  He probably took off work tomorrow so that they can stay in bed until right before their late check-out...after which they will probably be having brunch.
Can you tell that I just COMPLETELY romanticized everything I saw tonight.  Neil said I was just being creative, which was a nice compliment coming from him--he's the creative genius in the family and I'm the logical one--typically.  Incredible!  I absolutely had to laugh at myself and the way my little brain spun this amazing story out of a parked car--HA!
So the lesson to this story is that sometimes running sans Ipod is a good thing...all my daydreaming told me as much as some profound "night dream" would have.  I miss my husband!  We've been too busy lately, and we need a date night.
Alright guys...go do something romantic tonight :-)
Posted by Lindsey Broere at 5:52 PM

i'm glad you think a date night in charlotte is romantic. jarrad and i are headed to concord mills mall for a 1.5-day date, and i've been feeling kinda lame, since everyone we know keeps going to hawaii and other fancy places, staying in fancy hotels, spending fancy money. ain't nothin' wrong with keepin' it simple, RIGHT?? :) i'll just be glad to have my hubby to myself. so there!