Ahhh...we have been living like its 1970 in my house.  First, Neil's Mac notebook broke and then my laptop was eaten alive by a virus.  So we have ordered one of those new Mac computers (the ones that have the hard drive built into the monitor) that should arrive tomorrow.  Neil is in DC playing a show and I am at my parents (partially because I was jonesing for some computer time and partially because I have a yuck-o dentist apt at 8am tomorrow and my mom and dad are keeping Layla but mostly because its always nice to be "home" for a night--or two).  ANYWAY...this will be quick--I'm probably being very rude right now :-)
WELL-I am now up to 7.5 miles (hopefully this weekend).  My dad and I are planning on running the Kiwiah Island marathon in December.  It will be my first and my dad's second or third...he did the Marine Corps marathon when I was younger.  So YAY--I am doing something healthy for me AND spending time with my daddy.  WONDERFUL!  Its so nice to learn from him--no matter what it is.  He has a very gentle way about him...something that I REALLY admire. 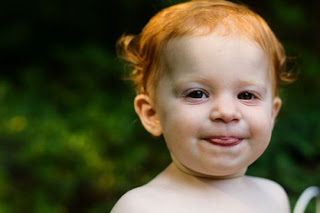 On to my sweet little Layla...geeze she has changed so much this past week...she actually is starting to "sort" things, which has me completely baffled.  Today for example, I fixed her a snack bowl (with her expert direction) of goldfish, Cheerios, raisins and a tiny little graham cracker.  I sat her in her high chair and started cleaning up the kitchen.  She was chattering away and kicking her little feet on the plastic foot rest, so I knew she was content not having my undivided attention--which struck me as very strange.  So I went over to her chair to find that she had dumped her little bowl out on the table and LITERALLY sorted her snack so that each item had its own pile.  In fact, each pile was spaced almost equally apart from the other piles.  And, each time she would place a raisin in its respective pile, she would get the cutest little smile of satisfaction.  HA and I noticed that I had that same little smile as I watched her "work".  So cute!
The day before yesterday, she dug through her little basket of stuffed animals and pulled out every rabbit--even the small "baby" rabbits and put them in a nice little row--all ten of them with no stray bears or dogs.  Then, she picked up three bunnies, held their faces together, kissed them and then giggled like crazy.  She is so stinkin funny!
Well..until next time..which I am hoping is soon and from my own computer :-)
Posted by Lindsey Broere at 4:36 PM

so you are not coming up to DC this weekend I take it? ah well, next time! CUTE STORY about Layla, you should've gotten a pic!!

WHAT happend to the MAC??? That is so scarey! I really don't know what I would do if ours broke. (At least we have it all backed up. Next one is free right? I mean, yours isn't even very old? Oh mercy!
Layla is a smarty pants.
I wish you well on training for the marathon. I was going to run a 1/2 in Dec 07. In fact I got up to 10 or 12 miles then fell out a door in our FL. trip and jacked my ankle. I'd still love to do one someday. You're dad might just be my hero