Week three...no wine (almost--but that's another blog for another time)..no red meat...no cigars...no MICROWAVE...and thanks to my friend Michelle, I am getting rid of my makeup and opting for some Origins makeup. Fortunately I've never worn much, so I won't be making a huge investment.
Whew...I feel like a lot has happened since last I blogged :-)
Neil and I are in the process of deciding whether or not to buy a new house...one right down the street from where we currently reside. This neighborhood is STRANGE, people. When Neil and I moved in about 3 years ago we felt like we moved onto Wisteria Lane...everyone waves...kids play in the street...we have neighborhood house parties...very strange. That being said...generations of families live in this neighborhood. Adults who were raised here go off to school and get married and fight tooth and nail to get back into the neighborhood. Neil and I love this place. I have several other "mommy" friends who are great and their children are just about Layla's age. So, when a slightly larger house was put on the market last week...Neil and I talked and thought..is now the time..YIKES?! Its obviously more expensive...but I think we can do it...we'll see. We are definately trusting God on this one.
So in the mean time, we have to fix up our house in case we sell. The first step meant getting our floors refinished! They had almost 80 years of love on them that needed some extra attention. SO last Friday, we moved in with my parents for the day. Mom and dad are fortunate enough to work out of their home..my dad is the most amazing photographer--he has a very patient and honest eye--the kind of honesty you hear in Bob Dylan's voice or see in an 80 year old man's hands--the kind you can't just duplicate (partial...nahhhh)...ANYWAY so they keep my little 3 year old nephew Bradyn. I brought Layla to their house on Friday morning and dad went nuts over her little dress...and I have to say, she was pretty stinking 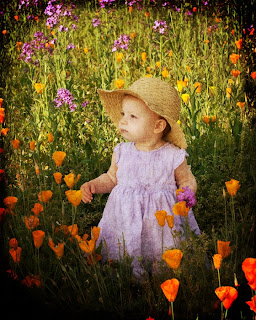 adorable. So we all went out to a field of poppies down the street and dad took some pictures of Layla. It was interesting...Bradyn definitely wanted in on the pictures, so it took some convincing to get him to move from directly in front of Layla to off camera. He and I picked flowers for his mommy, which worked wonders. So yeah, the picture to the side is one that dad took in the flowers...b-e-a-u-tiful. Can I just say...as a side note. Layla LOVES that little Bradyn so much! Her little eyes light up when he comes around and even when I talk about him...its the sweetest thing!
One last thing on Layla--well two...she has figured out that my iPod plays music and that she rather enjoys her own personal music player. She LOVES music. So she has started "requesting" the iPod, after which she walks around the room with the ear pieces in her ear bobbing her little head. Sometimes she sings...and that is CLASSIC. I have a video, so once I figure out the video thing, I'll post it.  Second, Neil and I took Layla to vote yesterday...she even wore her red, white and blue (blue and white polka dot dress and pants...and red hair-HA). She pushed the little buttons on our computer screen and everything. I don't think she realized the gravity of what she was doing, but Neil and I were SO proud of her! Our amazing little patriot in the making.
Well...wish us luck on the new venture...I'll keep you all posted :-)
Posted by Lindsey Broere at 3:30 AM

wow i missed a lot over here! it was a busy week for me and my folks came into town on top of it, soooo....

good luck on the house! adam and I were looking at real estate in this area and we were both feeling kinda sad at what we will be able to afford compared to, say, texas... sob!

btw, i should be around on the 31st and i would love to see neil, what are the details?!