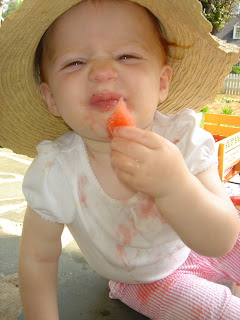 Layla had watermelon for the first time...I mean REALLY had watermelon.  It was hilarious.  Neil went out on the front porch to cut "the watermelon" in order to minimize the mess it would make.  HA--Layla had other...more desirable plans :-)
She ran after daddy and insisted that she supervise.  You can imagine her excitement when she discovered that watermelon was both edible and messy.  She had a blast as watermelon juice ran up her arms...down her shirt...between her toes...IN HER HAIR.  And it gets better...for all you "cleanies" out there.   Layla then proceeded to make her way to the yard with mommy to plant and water flowers.   So, just think--nice, sticky watermelon juice and potting soil--it was HILARIOUS!
Life with my little Layla, this weekend, showed me how to experience watermelon for the first time and it was amazing!
On the "milestones" front--Layla has started trying to put puzzles together...which seems to be giving her some frustration and ultimately pride when she gets one right--but it has been so hard for me not to reach in and make things easier for her.  She's incredible...she has no idea how much she is teaching me.
Posted by Lindsey Broere at 3:50 AM