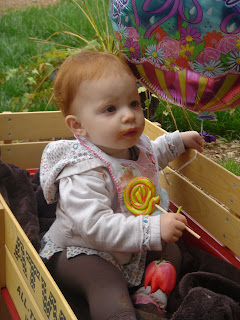 SO...we took a leap of faith and spent the night with Neil's parents last night. Layla has ONLY slept in her crib at our house since November--I've been a bad mommy. We are taking two family vacations to the beach this year and I thought it would be hell if we didn't get her accustomed to sleeping somewhere other than her crib. So, we packed up everything--her bumper pad, her sheets, her blankie, her crib toys--and headed to High Point for the night. I was a nervous wreck. I was so afraid that it wouldn't work and we'd be driving back to Lexington at 8pm. BUT....drum roll.......Layla did amazing. She cried for about 5 minutes just after I put her down, but after that, she slept straight through the night until about 7am! YAY! I was so proud of her. Its crazy how something that small makes me so proud of her. I don't know what I'll do when she makes her first "A". HA!

Layla also experienced her first injury this week. I thought it was major, but in reality was probably no big deal. She has a little toy dump truck that she loves to take to the park and fill with mulch. She was pushing it around in the house the other day and I guess put too much weight on the back. The truck tipped back and popped her in the mouth. It looked a lot worse than it really was. She bleed and bleed and bleed--and cried and cried and cried. I was heartbroken, so when we went to the grocery that afternoon I made sure to get her a "Get Well Soon" balloon. Interestingly enough--her daddy felt so sorry for her that he stopped at the candy store downtown and picked her up a giant cotton candy flavored lollipop. I took a picture of her in her wagon...with the lollipop, balloon and flowers. Rotten :-)

OH and she has finally said what I believe is her very first big kid word. She's been saying "mommy" and "da da" for a couple of months and then picked up "ah-o" about two months ago. But she just said "clothes"--well more like "gos"--but still. She is absolutely obsessed with carrying her clothes around her room on hangers. She loads up both hands and walks in circles for at least 15 minutes. For a one year old--that is an eternity. So I think "clothes" being her first word less of her being a little diva and more of her interest in being able to successfully pack her hands full of hangers.
Posted by Lindsey Broere at 4:20 PM

ok, first, she SLEPT THRU THE NIGHT?? how old is she? i thought they don't do that till they're like 3 or something?! lol.
second, aww, what a sad story! :( with a happy ending ;P soo cute!
where'd she get that red hair?!
and finally, sounds like a future diva to me!!

HA...yeah some babies sleep through the night at 8 weeks and most do by 3 months...our little Layla didn't until she was 9 months.

You know...Neil and I have Irish grandmothers and great grandmothers who had beautiful auburn hair...so that's all we can figure.