My sweet mom comes over every Tuesday to spend time with Layla while I go and teach government at the community college.  She and I (probably without knowing that both were working on the same thing) have managed to teach Layla to identify and pick out 10-12 of her ABCs in less than a week's time.  I guess its that repetition between the two of us?  And Layla, she couldn't be more proud of her new skill.  She showed it off for Augie and Lauren last night and kept begging to "play more games".  You could just see her light up when their reaction was shock that she knew the letters.
And yesterday....as a HUGE treat to me, mom came equipped with a shovel and bucket.  If you guys remember, I am not a gardener.  I like to think I am, but I'm not.  I wish I were because I enjoy beautiful flowers, but I am not.  Mom, however, has the most amazing ability to landscape even the saddest little beds (mine would be a perfect example).  So yesterday, she split up this monster of a Hosta plant (who knew you could split them so easy) and then spread 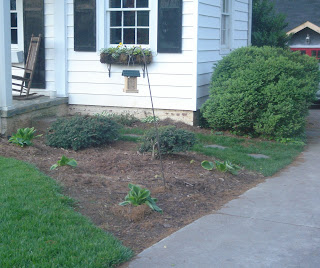 it out so that it looked more appealing.  It took her 15 minutes and my front bed already looks 10 times better.  I was in shock.  She also dug one crazy Hosta to make room for the new dogwood tree that she's going to give me.  I couldn't be more excited!  So I've taken a sort of before picture (its after the monster Hosta was split) and I'll take an after so you guys can really see how talented mom is at this digging in the dirt kind of thing.  No remember, our house was built in 1932, so mom really REALLY has her work cut out for her.  I think some of those less than desirable boxwoods have been here for 50 years--at least.
Finally...Layla and I made brownies yesterday afternoon....she thought it was so exciting how we made "choc" out of "dat powder".  Her eyes were as big as saucers.  It must have been a dream come true for her--such a gigantic bowl of chocolate.  So, I let her lick the bowl when I was finished pouring it into the pan.  I could hear my mom fussing at me from 15 miles down the road :-)  But Layla loved it...and she had a chocolate mustache--um--beard to prove it.  She had it everywhere...I even found some in her ear last night :-)  NOW, that's a sign of a great afternoon...having to wash chocolate out of your ears!
OH and t-minus 5 days until we get a little peek at the baby!  We're taking Layla with us...I hope that's a good idea?  I don't think anything will frighten her.
Posted by Lindsey Broere at 3:49 AM

I didn't realize your mom was such a talented gardener...I just read your dad's blog about her new favorite "lily family" plant that is beautiful. I also found her blog that I didn't know she had.

Brownies...yummmy!!! :) There's nothing like chocolate ears, beard, and mustache.

Little peek at baby...very cool! I can't wait to hear about it.

Don't you have a video of the chocolate episode? I need to see it. I could lick that chocolate right off of her!!