SO...
Drum roll..........
Only one tiny baby with one VERY big heartbeat in my belly.  I can hardly put words around being able to see his/her little heartbeat on the screen.  You could see both chambers of the heart beating like crazy.  It felt different this time than with Layla.  I understand now how a parent loves their child...I had no idea when I was watching Layla on that screen three years ago.
I remember thinking this with Layla after that first 8 week visit....how--HOW could anyone ever do anything to harm that little baby...how could anyone argue that there's what I'm seeing on that screen is not a precious little life.  I don't think I'll ever understand.  What I do know..is that the sound of that little heart beating was the sweetest thing in the world.
Equally as sweet?  Layla in the sonogram room.  The lady printed out the pictures for us and Layla snatched up one.  She started kissing that little picture and told me, "i yuv dis baby mommy".  She has such a sweet little spirit...and is going to be the BEST big sister.
Really quickly before I go...
the afternoon after the doctor's visit, my dad called and said his/my running buddy,  good friend and pilot was taking an old airplane up for a little while and wanted to know if Layla would like to go up in it.  Its an old 1940s two seater plane that could probably land in the top of a tree and be fine. 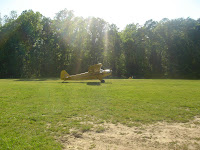 So off we went.  Layla was NOT a fan.  I think it was too loud....at least that's what she told me when the plane landed.  So for the past two nights and nap times, I've had to make up songs about the airplane--with her assistance.  After the first line, she makes sure to interject "and Layla does not like dat airplane...NO WAY".   Then I have to say, "because its too loud, its too loud....its way way way too loud".  I think that's a chart topper right there guys!
So here's one picture from the flight.  Obviously this is where she decides that she does not like the airplane.  Dad got some much better pictures that I'll try and post soon--assuming he give me permission :-) 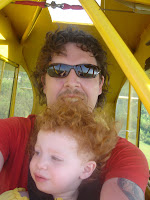 AND...
I have to leave you with this video from the other night.  To say Layla loves talking to a mirror is an understatement.  She has entire conversations with herself via the mirror.  She finally discovered Neil's shaving mirror in the tub and was so excited.  We missed taping the part where she was repeating, "fig newton"...but we caught her saying "Augie" and that was priceless.  Augie is Neil's sister's boyfriend and Layla is smitten.  Its obvious she loves saying his name.

Mirror talking from Black Daffodil Films on Vimeo.
Posted by Lindsey Broere at 4:52 AM

The videos are priceless,she is so adorable. Some day you will watch these again and cry enough tears to fill the bathtub she is sitting in.

oh thanks so much for sharing all these things with us ... The baby heartbeat, the too-load plane story, the bed time song and the video ...

you made (you and sweet layla) my day les filles :)

phew!!...i've been checking non-stop to find out the baby count.

layla is so silly...i love the airplane song..

congrats again on your little miracle! sorry it's not two - guess you will have to try again in a few years!

Linds...I'm so glad the one baby is doing well. Yes, Layla is going to be a great big sister.

I'm at the beach and for some reason, with the hotel's wirelss connection, I can't view the videos. After reading everyone's comments, I can't wait to watch them when I get home tomorrow.