DOCTOR VISIT:
So Layla had her two year check up yesterday with her doc.  She was so funny.  She was so excited to see "Doctor Griffim" and to find out what her heart had to say :-)  It was a great appointment until the nurse came back with the finger pricking thing, two tubes to fill up with blood AND a Hep A vaccine.  YIKES.  Neil was amazing with Layla.  I held her on my lap and he made the whole thing a game.  Layla never felt tense or scared.  She said "that hurt Layla" and cried a little, but it was nothing that two kisses on her ouchies AND a pink camo bandage couldn't take away.  It was great having my partner there...we make a pretty great team, even if it is just holding and entertaining a little one.  Which, come to think of it has been our biggest job for the past two years, so I probably shouldn't minimize it, huh? 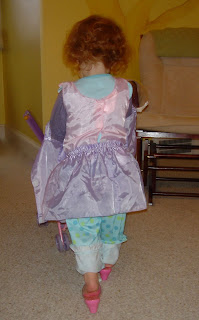 Okay so here is a little picture of her playing "dress up"--somewhat scary to see her in pink heels.  I remember promising my dad at a very young age that I would never wear heels or make up and that I'd be his little girl forever (sorry dad--I love my heels).  I felt myself wanting Layla to agree to that for me already and she's only TWO.
OOPS I DID IT AGAIN:
What in the world was I thinking.  I was having a great morning yesterday--productive, calm, energetic.  THEN out of nowhere (and I fault Facebook, not myself :D), I found myself in the pit of a political debate and I could not dig myself out fast enough.  I don't know why when it comes to politics, I instantly turn into a little pit bull.
Really, I was just sort of NOT minding my own business and looking at a friend's Facebook blog when I noticed some female--who will remain anonymous-made a comment about how this country needed less people like Rush Limbaugh who admittedly wanted this "country to fail".  EXCUSE ME...I couldn't let a misguided comment like that just go down in Facebook history as the truth.  It was up to me to set this seemingly ignorant person straight, right.  I think my dad warned me of trying to argue politics with the other side of the ideological spectrum.  OOPS!
Anyway, as we started inching toward arguing the tenants of socialism, I replied that Facebook probably wasn't an appropriate venue to flex our academic muscles (although I do feel mine were in far better shape)..HA!
So I went out for a run yesterday afternoon after all of this went down, and could only get 4 miles in because I was so stinking upset.  You know, when you leave a discussion and you say to yourself, "I should have said ______" and then you start rehearsing in your head for the next time something happens.  GUILTY.
But its over...and I promise you...no more political banter on Facebook for me.  I have to learn when to keep my mouth shut and just suck it up.  Isn't that what most of my conservative contemporaries do anyway?
Posted by Lindsey Broere at 3:34 AM

Good for you! I am proud of you for speaking up for what you believe in.

As always, Layla is so adorable and will always be my little "sweetpea"!

First of all...great Broere teamwork. I'm glad to see that Layla did not have a traumatizing doctor's appointment.

Second...after our run last night, I came home and told Landis about your Facebook "discussion" with the "unnamed person" (whom he knows from high school) and he was very proud of you for standing up to what he called the other girl, "a nutcase." Way to go! Conservatives like us need to start putting "nutcases" in their place more often.

(I found a significant grammatical error, so I had to correct it by deleting the first comment)

I know EXACTLY how you feel! Us out-spoken, expressive, creative, bold, truth-bringers are alike when it comes to the things we are passionate about (e.g; family, faith, country, ideals, college teams, etc...) I feel like Old Faithful sometimes when I read or hear absurd statements from the "liberals" who think themselves more "enlightened" than us simpler folk. I can only stand so much before I blow! But I have to remind myself of a very simple proverb: "If your opponent can make you angry in a debate, he's beaten you."

Be encouraged to know that there are so many others out there like you.

Amen Team Thompson....Linds, I just love ya so much (and your political mouth)! There should be more just like you....

okay, once again, that comment was from me, not Matt...geez!