Dad and I were talking about discipline a few weeks ago as we were doing a long run...he told me when he was younger and a wrestler in high school that he would work on his mental discipline in every aspect of his life.  He told me how when he'd brush his teeth in the morning and at night and when he felt like quitting, he'd force himself brush his teeth just a couple of minutes more.  He used that one little exercise (along with many others) to work on disciplining himself to go a couple more steps past quitting.
SO...after my experience yesterday with the ivy...and with the dirt and bugs in general, I decided to work on some discipline of my own.  Now, you guys know from reading my blogs about running, that I am a person of extremes....SO this shouldn't come as much of a surprise. 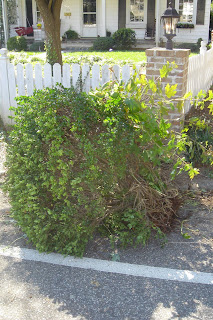 My mom came over today to spend some time with Layla...so I decided to get sweaty and dirty and see how much I could handle.  SO, I got out the Clorox and some gloves...a nice little household brush (like you'd use on tires) and scrubbed the siding on my house.  Then, I scrubbed the cushions that go on the porch swings....then...I got out the shovel (Oh yes...dirt time) and dug up some small shrubs that have been driving me nuts for a little while...then..I dug up some tiny saplings that were randomly growing around the house...THEN...with dirt in my hair...bleach on my skin..I thought what the heck..I'm digging up some bushes that I've been dying to get rid of.  SO, with Christina Aguilera's "Dirty" playing in my head, I and my shovel approached said bushes and in 20 minutes, they were out at the road for garbage pickup.  YAY!
Today my friends, I battled dirt and bugs...and I won.  I took a little picture as evidence of my victory.  It probably doesn't do me justice.  I swear the bushes are much larger than they appear in the photo.  They're boxwoods...crazy old boxwoods.    OH and notice all the pretty white pieces of siding in the background.  I think I'm going to have dinner tonight in my neighbor's yard...facing my house.   Ahhhh...the thrill of victory.
Posted by Lindsey Broere at 11:09 AM

hum, interesting... I would like to hear more about this mental discipline... is it only making yourself do things you don't want to do???

ha ha..
no...I think its with anything you do...going just one step past when you'd normally throw in the towel. It really is good exercise....

Maybe this is saying too much...but I actually do it when I'm washing dishes...HA!