Not the hands of a lady 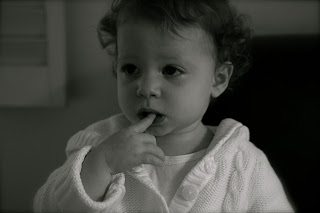 Layla An-
WOW...it seems like she's changing every day!  She's started playing in her room by herself in the mornings and sometimes a little the afternoon!  I noticed the other day that I was kind of getting in her space so I asked her if she'd like mommy to go downstairs and she could stay in her room and play.  She said "yes"...I walked downstairs and turned the monitor up.  I sat and listened to her talk to her "BAby"...to her telephone...she sang a little bit...I had to fight the urge to run back upstairs and squeeze her.  She played alone for over 15 minutes.
HA-and she also did the funniest thing on Tuesday morning.  I went up to her room when she woke up as I normally do.  I had a North Face over my pink and white polka dot dress shirt (a shirt Layla's never seen)...I took off my jacket...Layla's eyes lit up, she gasped and said..."ooooooo prettty" and then danced in circles.  HA!  She was commenting on my shirt!  So funny.
RANDOMNESS-
I don't really do yard work...I don't like dirt...I don't like bugs...I'm not at all prissy...I SWEAR...I just am not a fan of dirty hands...
SO after working all afternoon in my front bed pulling up variegated ivy that had been growing for two years and cursing in my head more than I did driving back and forth to downtown Charlotte every day for 5 months, I wondered why someone so NOT prissy hated dirt on my hands and bugs crawling up my arms.  When I felt like taking a knee in my front bed...looking at my house and screaming "As God is my witness, they're not going to lick me....As God is my witness, I'll never go hungry again"--HA--I remembered my love of Scarlett O'Hara in Gone with the Wind--oh yeah...and my inclination toward the slightly dramatic.
My favorite movie growing up was Gone with the Wind--in fact, there was a short period of time when I watched it multiple times a month.  I say all this to say...I honestly believe that I was crazy influenced by the movie...I've noted random parts of Scarlett in my responses and outlook on things way too many times.  Certainly not something I'm very proud of...
ANYWAY...so I remembered this part from the movie while washing the dirt off my hands. Scarlett goes to visit Rhett in jail as an attempt to get money for the taxes her family owes on Tara.  She's quite successful with Rhett until he notices her normally soft hands are calloused from having to work in the fields.
Rhett:  What have you been doing with your hands.
Scarlett:  I went riding yesterday without my gloves
Rhett:  Those aren't the hands of a lady, you've been working with them like a field hen.
Ahhh...my hands are so yucky today...BUT...BUT BUT...all of the ivy is gone and an intense moisturizing treatment for my hands has commenced.  We battled hard.  I sensed it starting to get weaker...easier to pull out huge masses at a time...and when I sensed it getting weaker--I pulled out a major offensive BAM...gone!  You know...gloves would have probably prevented 9/10 of the ugly words coming to my head.  And can I just say...I dreamed about that stinkin ivy last night.  I woke Neil up because I was thrashing around in bed...I thought the ivy was wrapped around my ankle.  I think it was mocking me.  Strange that that stinkin ivy would take on a life of its own!
Posted by Lindsey Broere at 10:47 AM

Oh wow Linds. That must be a woman thing, for some reason women like that movie. I have never made it all the way through without losing complete control of my ADHD. Even the topic bores me... it's that bad. I must confess, I am commenting without reading every word of your blog. Sorry, you can slap me later.

good story! up north we wear gloves when doing yard work...saves our hands :)