LAYLA AN-
well...
Two days and no hitting!  I know we aren't out of the woods just yet...but it was so interesting to see Layla start to use some self-control.  That notion must be so foreign for her (must be nice).  I could see that strong desire to hit go straight across her little face...I would brace myself for a battle of wits with an 18 month old...and then WHEW...she put her little hands down and shook her head "no".   So she's learning a very important life lesson and I am so thankful that I am the one teaching her...restraint...and self control...those are hard ones!
She also is now convinced that only her Papa changes her diaper...despite the fact that I change almost all her diapers?  Strange.  Today, she made a yucky and then ran to find my phone, brought it to me, opened it and said "papa" while grabbing her diaper.  So dad...looks like you have a very lucrative career as a professional diaper changer.  You definitely made an impression on little Layla.  HA...so funny.  Layla has also woken up nearly every morning for the past 3-4 days saying "Nana...Papa....Beau....NO!" (which is Layla speak for nana and papa have a new puppy, Beau.  He bites at my feet and nana tells him "NO BEAU!")  I wonder if she's dreaming about Beau or something?  It is certainly the first thing on her mind in the morning. 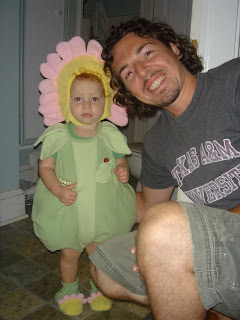 FINALLY...I purchased her little Halloween costume and it is so cute.  I was considering a piglet costume, but the hood looked really REALLY heavy and uncomfortable.  SO I opted for a flower costume.  She has little green and pink striped tights that go with it, but I haven't put the whole thing on her yet.  She really found the "hat" to be quite comical...so I'm thinking I made a good choice.  PLUS, I figured this would be my last Halloween to dress her completely ridiculous and cute, so I'm taking advantage of it :-)  She happens to be quite SMITTEN with her daddy right now so she insisted he be in the picture.  I feel so incredibly blessed to see the two of them together--two peas in a pod.
RUNNING:
Tonight is my first stab at speed work.  I'm excited but kind of nervous.  I guess I just don't know what to expect.  It should be fun though...and it'll be nice to have my dad with me while doing lap after lap around the track.  Natasha, dad and I did a 10 mile run last night so it'll be interesting to see how my muscles have recovered from my long run on Saturday...a 5.5 mile run on Monday...10 on Tuesday AND then speed work tonight.  Am I doing too much?   Should I be working on showing some restraint?  Guess I'll know in about 5 hours :-)
AND I have to give kudos to Natasha for doing so well last night!  She was sick with a yucky cold but still did 10 miles without even the first complaint.  Good job Tasha!  I'm so proud of you and excited to have had an hour and a half of YOU time last night.  I am so blessed....SO SO SO blessed.
Posted by Lindsey Broere at 12:00 PM

awww fun costume!! isn't it great to watch her little personality come out?? being a mommy is the best.

Awe...she'll look great for the Halloween Party! Love the costume...any gal would love to be a flower!

No word if the 5K is a go or not. You talking about a 10 miler made me puke in my mouth a little bit.

Yeah Linds...that flower outfit is about as cute as you get. :) ADORABLE!!! Please post some pictures at Halloween with the full Halloween "get up"...I can't wait to see the tights!!!

I can't wait to hear how your speed work went. I know how my legs felt after that 10 mile run, so just thinking of speed work the day after makes me hurt.

By the way...speaking of the run...I out ran my terrible cold. I have a little runny nose now, but no fever!!! YAY!! I guess that's the answer to fighting the common cold...RUN!!! :)

LOVE the costume, she looks cute as a button! and such a good girl! she's growing up so much, i see it every day you post a pic - I'm sure you notice even more! pretty soon she will be out of diapers!