Two weeks ago, Adalei had her first baby exam at the pediatrician's office. She was a champ--no tears even as I walked her naked little body down to be laid on those cold scales. She wasn't able to see her pediatrician that day--and I was just a little bummed. Dr. Griffith has been Layla's pediatrician since birth and I have LOVED her--BUT because babies' first appointments are kind of last minute, I guess you have to take whoever you can get. SO we saw a new doctor--who was great with Adalei--very knowledgeable and super sweet (but not Dr. Griffith). 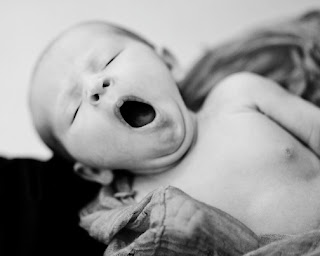 The exam went great until he got to her hips and wiggled them around--I've always wondered what the purpose was in wiggling their hips like they did and I was soon to find out. The doctor finished the exam, picked up Adalei and handed her to me. He said everything looked perfect except for her left hip. During labor, babies release the hormone relaxin to allow for their joints to be flexible enough to adapt to the tight quarters of the birth canal. Because their joints become more flexible during birth, some babies' ball and socket joints become completely dislodged. Adalei was one of those babies. The doctor ordered an ultrasound to see how bad her hips looked so that we could determine if she'd have to wear a brace or have surgery. WHAT?!? I was in shock. The idea of this perfect little one having to endure surgery or having to wear a brace and be different than other babies sent me reeling. I just don't think a parent can ever be prepared for that kind of thing--and this was minor compared to what so many other mommies and daddies go through with their newborns.
I walked out of the room--made her two week exam appointment (with Dr. Griffith), scheduled the ultrasound for after Christmas and New Year's and grabbed my phone to call Neil. I tried to gloss over the whole hip thing--partially to protect me from hearing myself say that little Adalei may have to have surgery and partially to protect Neil from being worried. But he's a pretty sharp guy and picked up on the severity of it pretty quickly.
When I got home and took Adalei back to the bedroom to change her diaper...Neil followed with his little prayer journal that he keeps. He wrote down the date and then he wrote down "do not--DO NOT--be shocked when the doctors say Adalei's hip is healed". My first thought, "good luck with that one, buddy". So we prayed for her--and I continued to pray with every single diaper change--except probably the night ones where I'm not at 100%--when I would see her sweet little hip and remind myself to be careful with her. I have to admit though...I said more than a few prayers that were lacking in faith over the course of two weeks. Oddly enough, Neil and I had been working our way through Mark and the passage where a man brings his spirit possessed son to Jesus for healing kept ringing in my ears (Mark 9:14-30)--in particular the verse where the father says, "I do belive; help my unbelief". Never had that one verse made so much sense....it became a part of my prayers over then next few weeks--a huge part of my prayers. Neil shared the news with his bible study group--a group of guys that are a blessing to BOTH of us--and they all prayed for Adalei. That little thing was covered up in prayers, that's for sure!
SO...
Monday was her two week check up. I was dreading it. I dreaded hearing them tell me how yucky her hip was and what we'd have to do to make sure the problem was addressed. When Dr. Griffith walked in, I felt my heart beat a little faster. She examined Adalei's eyes, ears, mouth, tummy...and then started to open her diaper. I held my breath and walked across the room to look over her as she pushed on Adalei's hips. She pushed once....scrunched her face a little...and pushed again. This is the conversation that followed:
Dr. G: Interesting
Me: Yeah, the doctor she saw last time recommended an ultrasound for her hip, we just haven't had it done yet.
Dr. G: I saw that on her chart, but I just don't understand. Her hip is perfectly normal.
Me: Excuse me?
Dr. G: Her hip is normal. I don't see any reason to schedule that ultrasound. I'm not sure what happened here, but what you have here is a perfectly healthy, normal and cute as a button baby. She's going to be easy to spoil.
I laughed and agreed about the "easy to spoil" part. But I'm sure I was white as a sheet. I think if she would have touched my shoulder...I would have fallen over. I was in complete shock. When she left the room and I looked over at Adalei--kicking her feet and content as could be--my elbows hit that exam table and I wept. As I got her dressed, I couldn't help but look at her hip and be in awe that her little hip had been touched by my sweet Lord. I think her little hip will always be a reminder to me of God's mercy and faithfulness. I can hardly look at it--even days later--without feeling humbled.
So while some may give credit to coincidence--or some may think it was just a normal mistake made by a doctor--I like to think that my sweet baby was healed by the Great Physician. I really don't think there is any other explanation.
Posted by Lindsey Broere at 2:00 AM

WOW, what an awesome testimony!! and beautifully written, besides. praise God!

Ain't God good? I've noticed that often when people are serious about their relationship with the Lord there is a test... and another test and another. Sometimes the tests are very difficult, but always the rewards are great. God is building your faith, don't worry about trying to understand, just live in it minute by minute.

Thank you Lindsey for sharing that beautiful story of God's amazing love and blessing!
How fitting is Adalei's middle name...Adalei Grace

This is the best news! I am so glad her hip is healed!

What an amazing miracle. Thanks for sharing your story. It has blessed my day.

Praise God for His healing! Can't wait to get together with y'all and "check out" that hip for myself.

Naturally, my hip checking involves lots of holding and smelling of baby heads and little finger holding and looking at tiny baby feet and so forth. I think I can adequately evaluate a hip while comfortably snuggling. ;)

Hope to see you soon.

I love these reminders! What a MIGHTY God we serve. Thanks for sharing...

You are exactly right - there is no other explanation except for the Lord's great healing. Just imagine the healing that could take place all over the world if more people would believe like you and Neil. As I wipe the tears from my eyes, I am saying a prayer of thanks to God for taking care of precious Adalei - what a miracle! :)

so my sister, Bryna Rodenhizer, sent me the link to this post because she thought I would like it...she was right--amazing! God is SO good! And what a sweet baby you have :)

Wow, Lindsey. What a wonderful testimony! Thanks for sharing...and being so honest about where you were at faith-wise through it all.

wow. what an amazing story, lindsey! i'm so glad her hip is healed!

I inclination not acquiesce in on it. I over precise post. Specially the appellation attracted me to be familiar with the whole story.