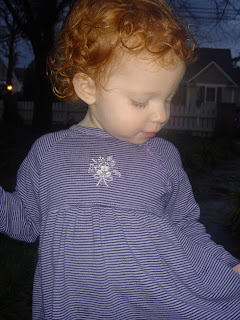 LAYLA:
How does this happen?  Layla is talking in full sentences...within the past week she has become quite the chatty Kathy.  She's worked her way through half of her ABCs...I had no clue she was picking up on my singing them 2-3 times a day, but three days ago she randomly started singing "A B C...HIJK....LMMMMNNNOP....XTUV...Z" .  I was so proud while she was sort of unimpressed, like she's known them for weeks but just now let it out.
So here are two cute little "learning to talk" Layla stories.  Yesterday she was talking to her "buddy"--some imaginary friend she has--while I was settling her down before her nap.  I looked down at her to ask her what she was talking about, when she asked me to "move you face peeaass".  I couldn't help but giggle--clearly, I was in her way.  Then she said (very matter-of-factly), "really should moovvee, mommy".  HA!  I felt like I was hearing myself.  I tell her quite frequently that she "really should" do something (ie-put her shoes on, eat her green beans, etc).
Last night, as we were saying her prayers...I kind of went off on a tangent like I sometimes do during my own prayer time.  We were thanking God for daddy and his strong hands and hard work, when I started praying for his business endeavors.  I felt Layla's body move...I cracked my eyes open and she was looking at me with this blank look on her face.  I think I must have been talking "big girl" talk.  She quietly said, "mommy....mommy...no, mommy (long pause)....Amen".
Toddler talk is so sweet.  Please tell me she'll talk like this forever.  OH...Go to Neil's blog and check out her dance moves...the kid has some talent :-)
RUNNING:
I realize I haven't even really mentioned running in weeks.  Dad and I haven't picked up our training for May yet.  We're still kind of running easy--sort of.  Last week, I logged about 45 miles...and we're still running our long runs and easy runs at an average 8:30 pace--which is a really fun change.  Its actually much easier for me to keep that pace than a slower one?  Strange?  I guess its just different muscle groups.
Our long run yesterday was quite nice.  We used my Garmin, which allowed us to run an entirely new route without any planning.  We kind of took the turns at the last minute, but kept an eye on our mileage via the Garmin.  It was so nice to mix it up a little and get off our normal path.  Even our conversations yesterday seemed refreshed and different.
One of the things we talked about yesterday was our New Year's day run.  I started out on that run with sort of a quiet expectation that it would be, at the least, slightly enlightening--because its New Year's and that's what happens, right?   But, as I was running...I started thinking about my pace...my to-do list...grocery shopping...the mundane.  I got back to the house and realized that my 5 miles on New Year's day wasn't much more than a normal little run.  Dad experienced something similar.  We agreed that that feeling or normalcy after a run made that run extraordinary.  Dad said its because running is what "we do" (which kind of made me giggle...dad called the day after the marathon and asked if I wanted to go out and "do what we do"--meaning RUN--and we did but it wasn't pretty).  We run--not because of a resolution or because the idea of running sounds nice...we run because we have to.  How amazing is it that we do something so great for our bodies and our minds...and its just normal for us--like eating and sleeping.  SO..I'm going to enjoy more mundane runs this year...little 5-7 mile runs with  no Garmin...no lofty expectations...just the sound of my feet hitting the pavement and my voice going over all my to-do lists and Layla's little voice telling me that I "really should move"  :-)
Posted by Lindsey Broere at 3:38 AM

I agree with you about the New Year's Day running...it was liberating for me to hit the pavement knowing that this running thing is not a "resolution" but something that I have wanted to do and have done way before the time of year caused me to declare it a goal.

However...I'm sure you will agree...to all those people who did make running a resoluton this year...GREAT FOR YOU!! Welcome aboard!!!